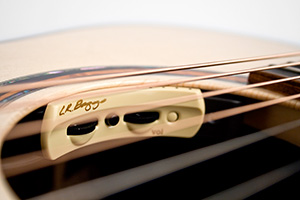 All Lakewood cutaway / pickup guitars are equipped with a fantastic pickup system: The L.R. Baggs "Anthem System". It's a high profile dual system that works with two pickups.

Initially, there is an under saddle transducer in the bridge, which is in addition complemented by a microphone sitting inside the guitar. The controls are, similar to the Lakewood Sonic System, accessible through the sound hole. There are controls for adjusting basically the master volume and also the ratio of the microphone. Sound controls or equalizers are something you won’t find on the pre-amp, because the system reproduces our guitar’s natural sound incredibly well!
The Anthem System meets our expectations from a high-class pickup system fabulously in terms of tonal quality and aesthetics. Thus, it completes the line we are following with Lakewood generally. The minimalistic realization of the controls underlines at the same time the focus we want to equally set only on the very important aspects in guitar making. 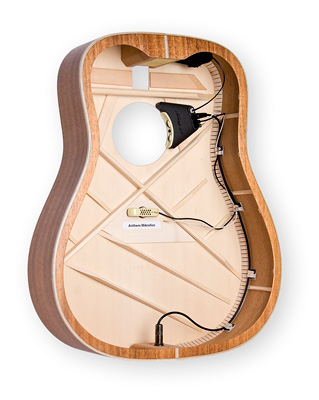 The L.R. Baggs Anthem System is a so-called dual system. As a basis there is a transducer underneath the bridge saddle that is, when turned up the volume pot fully, permanently working. The second pickup of the system is a microphone that can be added to the signal. That microphone is stationary mounted to the top in a small housing, which makes it noticeably feedback-resistant.

The controls are, similar to the Lakewood Sonic System, accessible through the sound hole. There are controls for adjusting basically the master volume and also the ratio of the microphone.

The microphone opens up new possibilities in reproducing body noises in an incredible quality while remaining manageable for the player on stage. This fact meets a trend and the "spirit of the time" to play creatively without ignoring the basic and conventional requirements of a down to earth pickup system. Tapping and percussive noises i.e. can now be better included in guitar playing, while strumming and genres like fingerstyle are benefiting from that as well.
The preamp is powered by a conventional 9V battery. The battery sits in a small pocket inside the guitar. For changing the battery we recommend loosening the strings slightly. It's an easy one hand job to get the old battery out and the new one in. Furthermore, the system offers a battery check that displays the remaining battery power in a row of LEDs when the button is pushed. Thus, the player is informed about a dying battery well in advance.

There's a phase switch also in case you encounter feedback problems or wave cancellations. The switch turns the electrified signal by 180 degrees in relation to the acoustic signal. 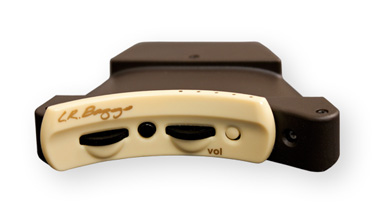 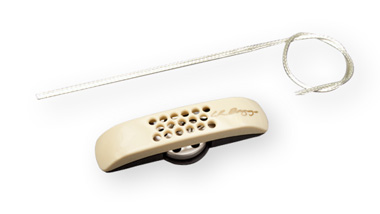 There are 2 potentiometers and 2 buttons as well as a small trim pot on the control unit in the sound hole.
The first pot is labeled "Vol" hence it is the master volume control. It controls the volume of the bridge transducer. The second pot can now add the microphone. It doesn't affect the master volume, though. You will notice that this pot will make the guitar more sensitive for amplifying the body noises (touching the top or knocking on it).
The black button is the phase switch. It turns the electrified signal by 180 degrees in relation to the acoustic signal you hear straight from the guitar. Use this button if you have the feeling you encounter feedback problems or wave cancellations.
The second button (the beige-colored one) is the battery check. If you press and hold this button, the LEDs on the front rim of the system with glow green. If all 5 LEDs glow your battery has full power. While using the system the battery power will go down step by step. According to that less LEDs will glow if you press to check. If only one or two of the LEDs are lit we recommend changing the battery.
On the far right side of the panel is a trim pot that can only be adjusted with a small screwdriver. That pot controls the basic sensitivity of the microphone, whose volume level is then be controlled by the second potentiometer.

The following models are standard-equipped with the Anthem System

The L.R. Baggs System is available for all guitars in the Lakewood Customshop.

The Element System is the basic version of the Anthem System as a pure bridge pickup without the microphone. It works with the same under saddle transducer like the Anthem System. The controls are once again reduced to only one volume pot that is also placed in the sound hole of the guitar.
The 9V battery sits in a battery pocket inside the guitar. 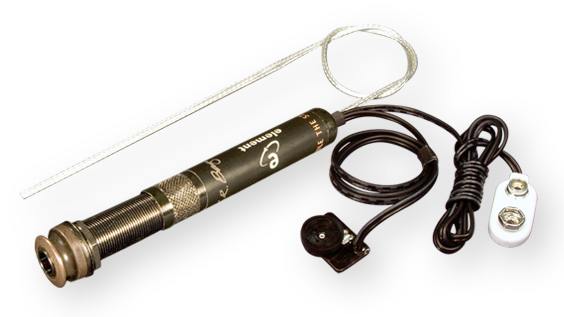 This system is as available in the Lakewood Customshop as a simple pickup system solution.

The Element pickup has got only one volume control in the sound hole of the guitar. You can progressively adjust the master volume here. There's no further sound option on this system.

If you are looking for information on pickup systems we used in the past, refer to these pages.